Yes, I’m a card-carrying “Media Artist.” But what does it mean?

It’s a concept that has evolved over the years. Once upon a time I called myself a Multimedia Specialist, and I spent my days building websites and CD-ROMs, learning various scripting languages and teaching people HTML. These days, it’s more about social media, apps, blogs and wikis.

While I’ve long had a nuanced view of technology, I’ve been developing a critical perspective lately, as evidenced in presentations such as Social Media, Social Justice and Phantom Vibrations.

I got started in media arts through independent television production, way back in the analog era. My career as a videographer began in the late 1980s with a documentary on the urinals of Indiana University. As difficult as it may be to credit, this 40-minute zero-budget movie won a Citation Award from the Indiana Film Society in 1990. It was featured on PBS, and is now in the permanent collections of several major universities, including Indiana University’s world-renowned Folklore Institute.

However, my main claim to fame in the world of video is that I am co-creator of ROX. This underground television series began as a lark, almost a joke, but quickly transformed my life. The controversies engendered by the show landed me on MTV and The Howard Stern Show, in The Wall Street Journal, The Village Voice, and Time Magazine. Wired called it “the best TV show in America,” and it was the most popular show in the early days of Free Speech TV. In 1995, ROX became the first TV show on the internet, ten years before the launch of YouTube. And it’s still in production.

In light of my work with social media and my history with ROX, you are now fully prepared to enjoy the following prank:

Other projects have included the reality-based animation of The All New Christy Paxson Show (read all about the project) as well as no.rox, an experimental television series in New Orleans.

I’m in a band! We’re Half Pagan and you should check us out. We play around New Orleans regularly and our first album is now available.

I’ve released a couple solo albums of experimental mashups. Despite their controversial nature and ambiguous legal status, they have even gotten a little airplay (thanks, WFMU). You can download my albums from Bandcamp. Note: All my albums are available free. Name your own price — zero is okay.

You can also listen to my old band on Musical Family Tree.

I’ve produced a number of podcasts over the years. J&B’s Nightcap was fun while it lasted. Teaching, Learning, and Everything Else began in 2008 and is still going strong. My newest entree is Editor B’s Morning Ride to Work. Give it a listen. 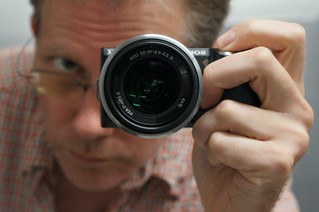 I’m also a photographer of sorts. I have published over 10,000 photos on Flickr. (Check out my photostream, or just a few of my favorites.) Lately I’ve been exhibiting in group shows hosted by Skewer Gallery at Kebab (New Orleans). Art critic Benjamin Morris calls my work “refreshing.”

I’m honored to have some of my work featured by the Spiritual Naturalist Society.

Here are some books that have featured my photography:

My photos have been used as cover art for The Journal of College Writing (Vol. 12) and the ebooks Thin Film by William Olson, Family Murders by Henry Carver, and Cultural Borrowings, a film studies anthology edited by Iain Robert Smith. I took the cover photo for Incognito by Biljana D. Obradović. I’ve also had a photo on the cover of the Louisiana Delta Yellow Pages.

How about some more academic citations? One of my photos illustrates a paper by Collen Judge called “Survey of Bicycle Trail-Users in New Orleans: Characteristics, Attitudes and Implications for Planning.” Another shows up in an essay by Kirsten Bell with the wonderful title of “Silent But Deadly: Farting Across Cultures,” which is collected in Showcasing Popular Anthropology. Several of my photos (and some text) are featured in Collected Youth by Hadar Barak, a graduate project for Bezalel Academy of Art and Design in Jerusalem. And if you scroll down far enough you’ll find my photo in Mary Ann Wilson’s article, “Forming Adults in Faith Through Fiction,” published in Notre Dame’s Church Life Journal.

Be sure to check out the U.S. Global Change Research Program’s report on The Impacts of Climate Change on Human Health in the United States. You’ll find my photo on page nine of the executive summary.

You’ll even find my photos in apps such as the Bonide Product Finder.

If you’d like, you can sign up to my photo newsletter for occasional email blasts featuring photos I’ve taken.

Of course it’s all interconnected. I frequently address the use and abuse of technology as part of my work in faculty development, and I’m particularly interested in supporting the creative process. I also produce a faculty development podcast: Teaching, Learning, and Everything Else. My writing addresses issues of technology and creativity, and I often publish via new media platforms. My art aims to give expression to my spiritual practice, which in turn helps me maintain a healthier relationship with technology — or so I hope. My art serves my activism as well.